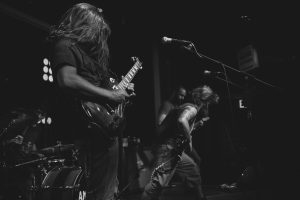 I Am The Owl has been described as “punk meets metal from the era when rock gods wielded axes… high volume music that inspires mosh pits”. In an era where many have wondered if rock ‘n’ roll was still alive, I Am The Owl has committed to a no-compromise approach to making heavy music for people who love heavy music.

The evolution of their sound can be heard on the initial singles from their 2nd EP, A Mission To Civilize: Part II, recorded in January of 2017 at the world famous Blasting Room studios in Fort Collins, CO. A follow up to their self-produced 2016 release, A Mission To Civilize: Part I, the album is set to be completed at the Blasting Room in early 2018.

Since 2014 the band has been spreading their “Mission to Civilize” throughout Colorado, appearing on stages across the state with the likes of In The Whale, Agent Orange, Counterpunch, Authority Zero, The Yawpers, The Lillingtons, Native Daughters, Elway, and many more.