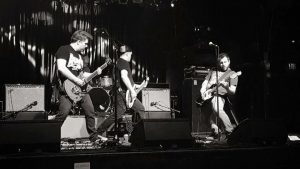 The Couch Bombs emerged after the ending of the ska band, Hatrick Penry. The bassist/guitarist Ian Rosenstein was looking to begin a new project during Juneof 2013 when he met up with his longtime friend Paul Fatur. They had been in previous bands together and Ian knew he needed a bass player. Ian called up Jake Johnson, former band mate of Hatrick Penry to play bass. Drummer Mason Kolodziej joined the band in late February 2014 and gives the band its music an aggressive and dynamic quality. The sound of the band is driving, energized and authentic punk rock. The Couch bombs welcomed their new lead guitarist Eli Johnson in January 2016 and Drummer Tim Sanchez in June of 2016.